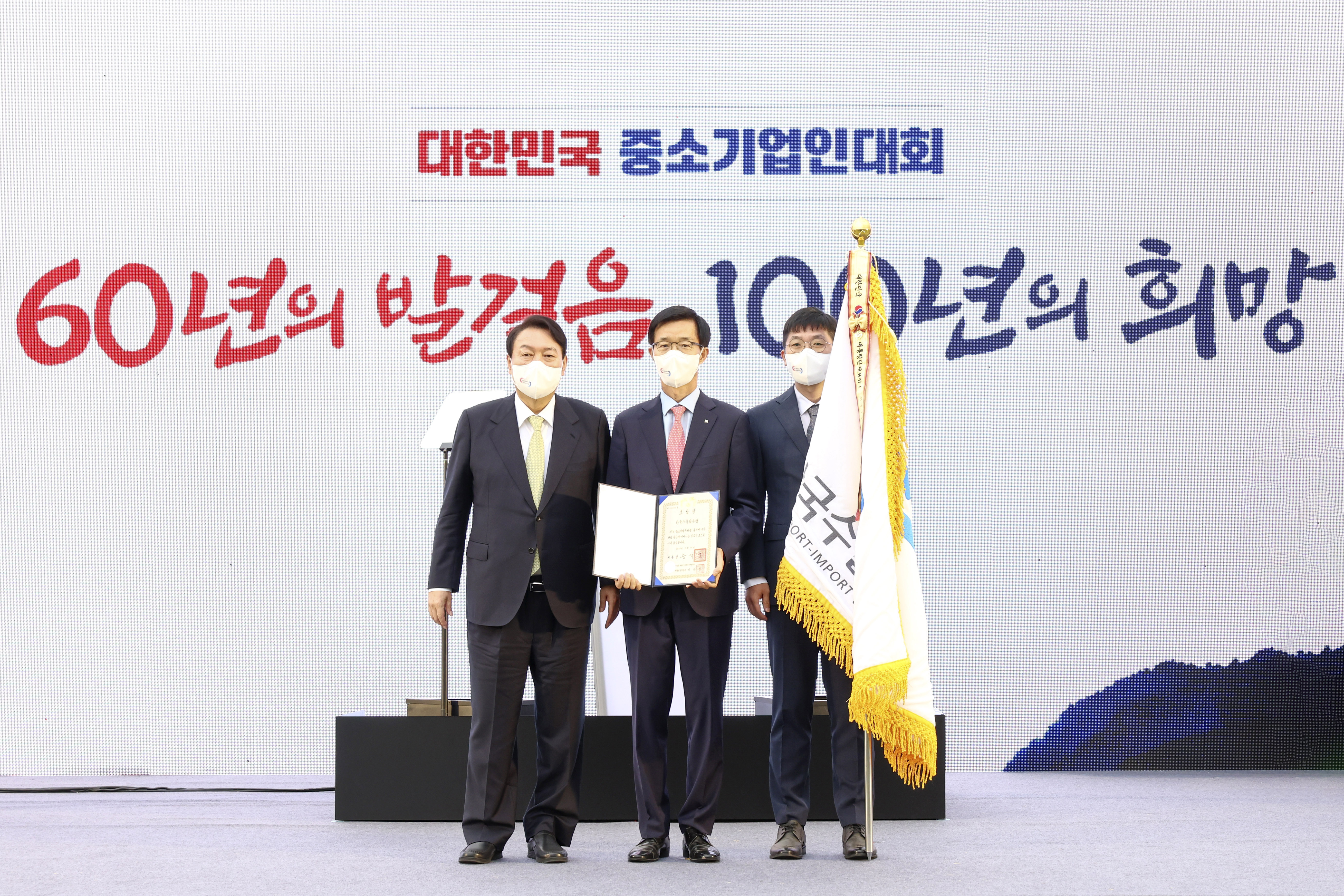 □ The Export-Import Bank of Korea (www.koreaexim.go.kr, Chairman Bang Moon-kyu, “Korea Eximbank") won the "Presidential Commendation for Dedication to Nurturing SMEs" at 2022 Convention for SMEs* held at the Presidential Office Complex in Yongsan District, Seoul, on the afternoon of May 25.
* The biggest event for SMEs awarding business leaders who have contributed to the national economic development and job creation and those who have helped SMEs to grow and develop

□ Korea Eximbank has been steeply increasing funding for SMEs over the past decade. Last year, it peaked at a record high of 30 trillion won which compares with around 20 trillion won in 2012. The funding for the first half of this year is expected to total 16.6 trillion won, breaking the record again.

○ The growth rate stands at 45%, which is much higher than the 30% export growth rate of SMEs in Korea during the same period.

○ Accordingly, last year, the bank‘s financial support to SMEs took up 50.2% of the total, exceeding the total amount for large companies and reaching an all-time high in itself. The proportion of loans to SMEs is estimated to reach 53% as of the end of June.

□ Korea Eximbank has been making efforts to increase support for SMEs in their exports, including launching a team dedicated to  a team dedicated to SMESMEs (SME Growth Support Team) and strengthening cooperation with other institutions. As a result, the number of SMEs benefiting from the bank’s support program surged by 41% from 4,316 in 2018 to 6,105 in 2021.

○ For a starter, the bank has focused its assistance on export beginners without sufficient experience in exports (or SMEs with annual exports of less than five million dollars) so that they can grow into small but strong players in the global market.

- As a result, the amount of support for the export beginners doubled year-on-year to three trillion won, and the number of the companies receiving the bank’s support increased by 36% from 2,138 to 2,899 in a year.

○ In addition, Korea Eximbank increased its international on-lending facility for SMEs, providing indirect support for their export and import transactions. It partnered with many commercial banks and their branches to complement its limited network (13 offices) thereby the number of SMEs using the on-lending program significantly increased (2,518 companies in 2018 → 4,118 companies in 2021).

□ As 97 percent of the loans offered by Korea Eximbank are credit loans, it can provide support for SMEs that are equipped with technology but without collateral or sound credit ratings, playing a practical role in facilitating the growth of SMEs’ exports.

○ In particular, its customized financial support programs for SMEs, having trouble finding funding from other banks due to its weak credit standing, lack of collateral and bankruptcy and restructuring record, are evaluated especially highly as they can help the companies grow into excellent companies.

○ (Case 1) Company A, which manufactures secondary battery equipment and supplies the products to large companies, suffered a large deficit as the large companies' plans to expand overseas factories were delayed due to COVID-19 in 2020. Despite Company A's lower creditworthiness, Korea Eximbank provided credit loans in consideration of its excellent technology, helping the company to resolve temporary financial difficulties and normalize its business operations.

○ (Case 2) Company B, an auto part manufacturer with 20 years in operation, was having difficulty getting funds from commercial banks due to its bankruptcy history. Korea Eximbank provided funds for the company to resume its export business, in consideration of its long-established technology and sales network. As a result, Company B made a successful comeback, with sales rising 27% in a year.

○ (Case 3) Company C is a semiconductor cleaning equipment manufacturer. For its advanced technology and growth potential, the bank highly evaluated the company and selected it as a candidate for the Hidden Champion Program in 2010. With Korea Eximbank’s intensive support in export funds ever since, the company’s exports grew 10 folds from only 10 billion won to 100 billion won over the period of 10 years, and finally last year, Company C graduated from SME and was certified as a mid-sized company with strong fundamentals.

□ Korea Eximbank is also operating the "Win-win Financial Program." Under the program the bank extends loans to large companies to settle their payments for supplies delivered by their partner SMEs so that both large and small companies can grow together.

○ This program is greatly helpful for SMEs since the principal and interests on the loans are borne by large companies, while SMEs can receive stable payments in a timely manner.

○ The volume of the program doubled from one trillion won in 2018 to two trillion won each in 2019 and 2020, and it effectively blocked the possibility of bankruptcy of the SMEs partnering with shipbuilders suffering in Korea from sluggish orders in those years.

○ In addition, Korea Eximbank is expanding the opportunities for SMEs to participate in the global supply chain by providing necessary funds when they enter overseas markets jointly with their large company partners.

○ He added, "We will make all-out effort to support local SMEs equipped with technology so that they can to grow into small but strong players in the global market. Also, we will keep increasing support for SMEs, which was the highest ever last year."